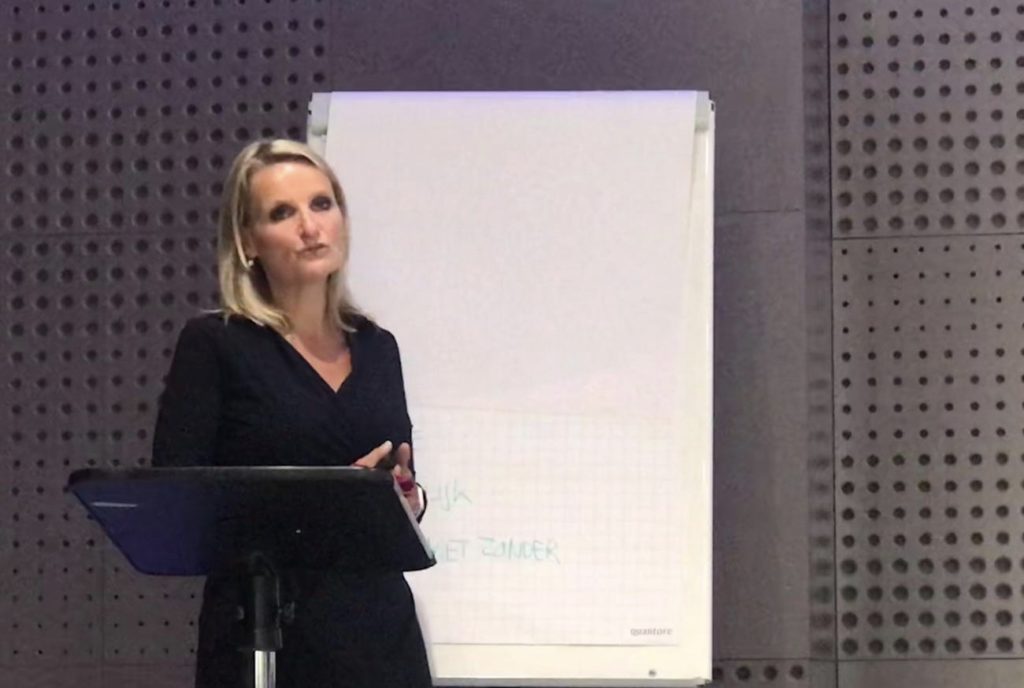 Me at the WAA speaking about the Human Voice and Leadership

I had been invited to speak about voice and leadership at the WAA (landelijke Werkgroep Artsen en Advocaten) in the Beatrixtheatre, Utrecht.
It was such an inspiring evening with such an inspiring audience of senior executives. All leaders gathered together to learn everything about the Human Voice in relation to leadership.

‘Being a human leading with a strong voice is so important these days.
Especially in the digital revolution storms were we humans live in now.
It’s all about getting our message across in a clear and convincing way.
To gain confidence to speak up so that we humans (and especially women!) become someone worth listening to.
To be heard, to be seen. Finding your true own voice is all about creating more impact and build credibility.
H2H.’

I spoke that evening about the importance of having a voice.

My contribution was rated with an 8,5 out of 10! Wow!
How cool to share al my expertise about the Human Voice in relation to leadership and get such a feedbackscore by the audience.
So grateful!

Here you’ll find my lecture.
Hopefully you’ll get inspired just like my audience of senior executives that evening.That would be wonderful!
So read it and please let me know your thoughts about it by leaving a comment via info@annekebrouwer.nl
Looking forward hearing from you.
Leave a comment and I will respond!

THE HUMAN VOICE and LEADERSHIP

So…
Why do we humans speak?
Why are we here gathered together,
H2H
Why not sending emails to each other with the hand-out attached?
Why not put a USB in a robot and let him talk?

To find the answer we should take a look at another question:

What is something a human can do that a robot cannot?
Related to speaking

All speaking we do as humans is about
getting our message across in a clear and convincing way.

As a public speaking coach and voice coach
I work with executives from all different kinds of fields of work.
I guide them through discovering
and becoming aware of their strenghts and weaknesses in public speaking
So that they
Gain more confidence
Create more impact
And
Build credibility.

In this given 2 hours I want to involve you in an experiment.
It’s a totally different experience in
How you are used to listen to a speaker
But it is important to do it this way.
While listening / on the way you’ll find out why.

First I want you to take a closer look at this image. (PICTURE ARISTOTLES)
……
Take your time to observe it.
Just observe it
And keep breathing
Nothing else
Just observe
……

Then I want you to take a closer look at this image.
…….
A totally different one
Keep breathing through your belly and just observe.
Take notice of what you see on this image.

Now I want to invite you
To sit back,
close your eyes…
Keep belly breathing
And listen….
………
(Tinkling bells)
………
Listen to the silence while noticing the sounds around you……
The sound of a ticking clock
The sound of people talking/walking outside this room
The sound of birds outside….
……
Now notice the person to your right…..
Can you become aware of his/her breathing patron?
……
Then switch your notice to the person to your left…..
And do the same thing.
……
Now notice the difference between right and left….
……
And while listening you keep breathing through your belly.
Breath in, your belly goes out…
Breath out, your belly goes in…
……
Now keep listening and bellybreathing with your eyes closed
until you hear the Bells ring again….

Here at the WAA with all leaders, lawyers & doctors gathered together
H2H
you are probably, like most of my clients, more interested in the question:

And maybe you expect me to give advice like:
“Lower your voice to be received more powerful”
Or
“Use more energy in your voice so that your voice fill up the whole room”
Or
“Speak vividly by emphasizing the most meaningful words so you won’t sound so moNOtonus or boring.”

But that doesn’t work
And you know that.
It’s not authentic.
And Leadership is all about authenticity and credibility.
It’s all about the confidence to speak up.
About finding your voice.
To be heard.
To be seen.
About INclusion

When I started as a SP in the early ‘90 working with voice disorders
I used to give such general advice to my clients
But through the years working with 100’s of people from all different kinds of fields of work I found out that those general advises don’t work,
They just don’t suit.

So I won”t talk about these voice things today.
If you want you can find all those tips and tricks on the internet.
The world wide web is stuffed with it.

But In this question ‘lais’ the answer why they came to me for.

I guess the first thing you’ll say is:
“But what’s the difference?”

What is the difference between listening and hearing?

Hearing comes automatically.
Whether you want it or not.
It’s a physical experience,
The sense of sound.
Ear & brain processing soundwaves.

We listen to music
We hear noice

So you first hear
than you decide if you listen yes or no.
It’s a sequence.

In the world where we live in now
We tend to stop listening because of all the noise,

That means you consume around 34 gigabyte of information every day!

In the meantime
Another more resent research (Faculty of Medicine and Health Science 2014, Gent, Belgium)
shows that in the last 10 years
we have sped up in speaking,
using more and more words per minute,
Between 130-200 words per minute
Using less breaks as well,
While decreasing the duration of every break

And we still speed up….
With all acces to the digital world we have now
and with all the information streams that is coming our way
as bulletstreams from a kalasjnikov
the outcome must be much,
Much higher now in 2019…..

This means less and less PROcessing time for you, the listener…
Wandering time…
Finding your own voice time

And like Geese Stuffed
With No time to swallow,
We, YOU! listeners tend to stop listening…..

Now bring back in your mind the first image I showed you.
The image of Artistotle.
We all know Aristotle and his retorical triangle.
Logos, ethos, pathos.
Mind, heart, credentials. The art of persuasion.
In early Greecq Democracy Persuasive skills where of vital importance.
“Having a Voice is all about being seen and being heard”, Aristotle said.
“About convincing people that you are someone worth listening to”.

They knew in those days how to use their voice and their body to be heard and to be seen.
They knew how to own the stage.

Not Demosthenes, the second image I showed you

Demosthenes had great ideas,
His dream was to become the greatest orator of his time.
But he had one problem,
Nobody wanted to listen to his brilliant ideas.
He had a weak voice,
So Nobody could hear him.
He also was called the stammerer.
The poor couldn’t even pronounce the ‘r’ of ‘rethoric”
They made fun of him while standing and speaking in front of the crowd.
They whispered silly things behind his back,
They even copied his way of speaking.
They bullied him.
Laughing.

The harder he tried and pushed to convince them to listen to him,
the more he got stuck.

The less they listened….

Somebody from the audience even screamed:
“Suck air in your lungs, not your brain!”

“What was his problem?”

He was authentic.
He had a message,
A meaning,
A purpose….
Even the confidence to speak up
but he hadn’t had the credibility….

What was the thing then?

The thing was that he wanted the people to listen.
He wanted to be listened to.
And the more he wanted it,
The more tense became his way of speaking:
– High breathing patrone
– Weaker voice
– Strained voice
– Higher voice
– Long sentences
– Uptempo
– restless way of speaking
– To much words in 1 sentence
– No use of silence
– Bombing words like a kalasjnikov, 700 bullets per min.
– By speaking so: no time for pauses
– Only sending
– And the most worse thing: because of the tension he started to stutter

But He still had his dream to become the greatest orator of his time.

What he did?
He started to practice his way of speaking.
– he walked uphill carrying heavy Stones on his back while speaking out loud poems to train speaking with his diaphragma focussing on the rythm, the use of pauses and becoming comfortable with silence in his speech.
– He put little Stones in his mouth while speaking to practice a clear voice and a better pronounciation.
– He put heavy s(w)ords on his shoulders to practice his bodylanguage, his presence, to own the stage.
– During Storms he went to the sea yelling poems against the sound of the wind to work on the energy and the power of his voice

And then he came back on stage.
Owning the stage
Shifting his focus on to be heard
Not to be listened to
Knowing his strengths and weaknesses in speaking.

These days I would say
He had become a mindful speaker….
Mindfully speaking

Well.
The rest is history…
He became one of the most famous influential orators of his time.
His dream came true.

To be heard,
To be listen

What’s the connection between Demosthenes, my coachees and you?

Your listeners hear it in your voice wether you push too much or you open up.

They will listen if you use your voice because you want to be heard.
By doing so you create space for your listeners to open up for your message while finding their own answers.

They won’t listen if you use your voice because you want to be listen to.
They feel you push and as a result they can’t do anything else then shut down and take a stap back.
Or worse: making fun of you.

Not listening.
Not resonating.
Not moving.
…..
No credibility

And that’s exactly what you don’t want to happen as a leader….
Do you?

Do you know where the word ‘inspiration’ comes from?

It comes from the latin word ‘inspirare’.

Your public can only breath your thoughts if you give room for it.

So I want to challenge you.

Like in the last 2 years at the WAA,
I will give you all personal feedback on how you present your business cases.
And I am delighted and excited to do so.

But This year I want to challenge you.

‘Suck air in your longs, not your brain’

Being a mindful speaker
Mindfully speaking.

Now Stretch yourself
Take time to come back in the here and now
Take a deep breath and breath out slowly.
……
Thank you.

Vorige artikel Do You even Know How to Breathe? Find your true Voice. The power of Breathing. Volgende artikel Great announcement! Thrilled! Licensee TEDxWassenaar!